skip to main | skip to sidebar

I'm just about to set off for Italy for a week, so, uh, screw you, and all that. Anyway, I recently received an empassioned message from Trixie for more telly recommendations. When I get a few hours spare, I might get around to it. In the meantime, I trust that you are already aware of the twisted humour of "Robot Chicken", from the minds of top movie start Seth Green and his buddies who employ a large team of slave animators who take children's toys and turn them into a weekly satire on pop culture. They're midway into their second season now, and a recent episode had a nice touch. In a segment on "Numb-chuck", one of the characters was thrown off a road bridge onto Route 78 West to Clinton -- which is one of my favourite roads! Nice one, Seth and co! 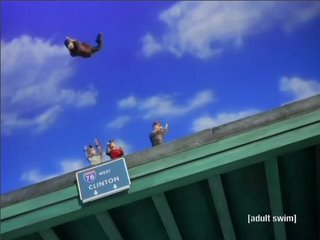 Anyway, off to the airport, and thence to Bologna, where I can hang out with the Bolognese.
Posted by Hugh at 18:03